Ten Years After Lehman. The Solution Was “More Lehmans”

The day Lehman went bankrupt I left the office in London for Waterloo Station and realized that something monumental had happened. The faces of the dozens of people waiting patiently for trains from the center to their homes were revealing. Most of them were, like me, City workers. Panic. 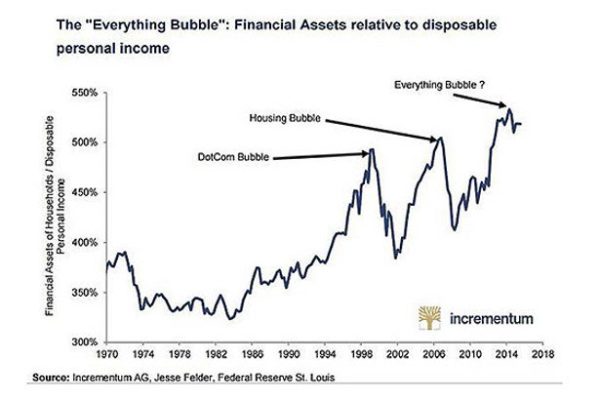 I remember when Freddie Mac and Fannie Mae -both government entities- were bailed mout, because it happened shortly before the Lehman collapse. They were the largest originators of subprime mortgages.

Why were subprime mortgages originated by Freddie and Fannie given maximum rating and credit quality? Because they had the government stamp.

What had happened with Lehman? The CEO, Richard Fuld, had been saying for some time that its situation was impeccable, that solvency and liquidity ratios were strong and the viability of the bank was out of the question. He also repeated something we hear too often nowadays, that the shares were simply under the “attack of speculators”. Many of my readers will remember similar excuses in Popular, Monte dei Paschi, Abengoa, Tesla and so many others. This “speculator attack” excuse was used a lot years later during the Eurozone crisis.

Lehman Brothers was not a commercial bank, managing deposits of retail savers, it was an investment bank. Their clients were “competent persons” that is, those that regulators deem with sufficient knowledge of the risk and complexity of the financial products they are offered. It is not possible to contract the services of an investment bank without being a competent person. Lehman was not run by incompetent people. It was managed by people that firmly believed in the system and that analysed risk the way that central banks and governments tell them to. Lehman accumulated high-risk mortgages in its assets because it believed, as so many analysts, commentators and experts said, that these assets had very little risk.

Crises never happen due to accumulation in high-risk assets, but due to the massive accumulation of assets that the entire mainstream deems as “low risk”. Houses never fall, the economy is booming, etc.

Lehman was a prime example of mainstream consensus analysis of risk and economic opportunity. When asset prices fall, buy more.

Lehman did not buy low. It bought in the middle of an already building bubble. More importantly, it did not sell high. It kept riding the gravy train.

Lehman acquired five mortgage lenders in 2003 and 2004, including subprime lenders, when house prices were already soaring. Its acquisitions were lauded by many analysts as genius. As the bubble grew, Lehman’s real estate division led the capital markets unit profits to soar more than 50% between 2004 and 2006. it was the fastest growing division in the entire business. Valuations reflected that “success” sending the multiples at which brokers valued the Lehman stock at all-time highs.

Janet Yellen said in 2005: “In my view, it makes sense to organize one’s thinking around three consecutive questions –three hurdles to jump before pulling the monetary policy trigger. First, if the bubble were to deflate on its own, would the effect on the economy be exceedingly large? Second, is it unlikely that the Fed could mitigate the consequences? Third, is monetary policy the best tool to use to deflate a house-price bubble? My answers to these questions in the shortest possible form are, “no,” “no,” and “no.”” Her analysis would not be as clear later in her years as Chairman of the Fed, where she saw no signs of bubbles.

Yellen was not as clear on the housing bubble as it looks. She also spoke of “sophisticated financial products that mitigate risk and facilitate access to housing financing” and Bernanke spoke of “a slowdown, but not a fall“. In essence, she said what most were saying. “Housing is a relatively small sector of the economy, and its decline should be self-correcting”. No, it was not.

Bernanke, on the other hand, saw no bubble and no risk for the economy in 2005.  Even in 2007, he saw no risk for the broader economy as subprime mortgages started to collapse.

Lehman beat consensus numerous times and reported record earnings every year from 2005 to 2007. It was unstoppable, an analyst told me at the time. “They buy cheap and always deliver”. “Naysayers are always proven wrong”, he said.  In fact Lehman bought in the middle of a bubble and rode it like The Beach Boys sang. “Catch a wave and you’ll feel on top of the world”.

Until the music stopped.

In 2007, Lehman reported net income of a record $4.2 billion on revenues of $19.3 billion. Unstoppable. However, house prices were already showing signals of weakness and subprime mortgages were already cracking in the market. Enter the experts.

The voice on the street, the words of market experts were almost unanimous. It was a correction, nothing else. We were living a new paradigm.

Even holders of subprime packages refused to lend to shortsellers because they believed the assets were super safe.

We must now remember the herous, those investors and analysts who warned of those risks and who were accused of being stupid, almost terrorism for showing that the risjks were enormous. They should be praised today as well.

Bubbles always look like a new paradigm. Valuations soar and the prudent investors are left speechless, looking like fools because they “missed” the rally. 2007 was exactly that. And the hundreds of experts at Lehman as well as most mainstream repeated over and over again the same mantras. “Just a correction”, “value opportunities” and more importantly, when reminded of the tech bubble years earlier “this time is different”. Houses are hard assets, technology is a promise. This time is different. it wasn’t.

And, like all bubbles, it burst when the patience of even the most prudent analyst was tested.

Here is where we learned from Lehman. Or what we did not learn, considering the bubble of everything we are living:

The share price of a bank is the thin veil of hope between its assets and its liabilities. Risk builds slowly and happens fast. Lehman’s assets were falling in value as liabilities rose with margin calls being triggered everywhere. Those uniquely profitable assets that were so scarce they could always be sold higher to many investors found no bid at all.

We constantly hear that there is enormous liquidity in the market waiting to buy a correction and that investors are cautious and would jump at the opportunity created by a market drop. It does not happen. The marginal buyer disappears.

Lehman also showed the futility of stress tests and traditional risk analysis. The impact of exposure to one asset class cannot be analysed believing everything else remains equal.

The two most dangerous words in economy are “ceteris paribus”. All else remaining equal. Nothing remains equal. It is such nonsense I cannot even believe that we still read thousands of pages of academic research and analysts’ reports based on that premise.

Lehman’s exposure to subprime was deemed “manageable” by bulls. It was not. The bank prided itself on having reduced debt, increased liquidity and sold assets throughout 2007.

By then it was too late. it did not survive the end of the year.

Lehman was not a cause of the financial crisis. it was a symptom of a more significant disease. A crisis created by excess risk and high debt has been “solved” by adding more debt and incentivising risk.

The timeline is always the same. First, deny the risk. Then, deem it manageable. Afterwards, take measures to “please” markets or rating agencies that are too small and too late. Stock collapses. Following that, blame speculators. Finally, close the shop. 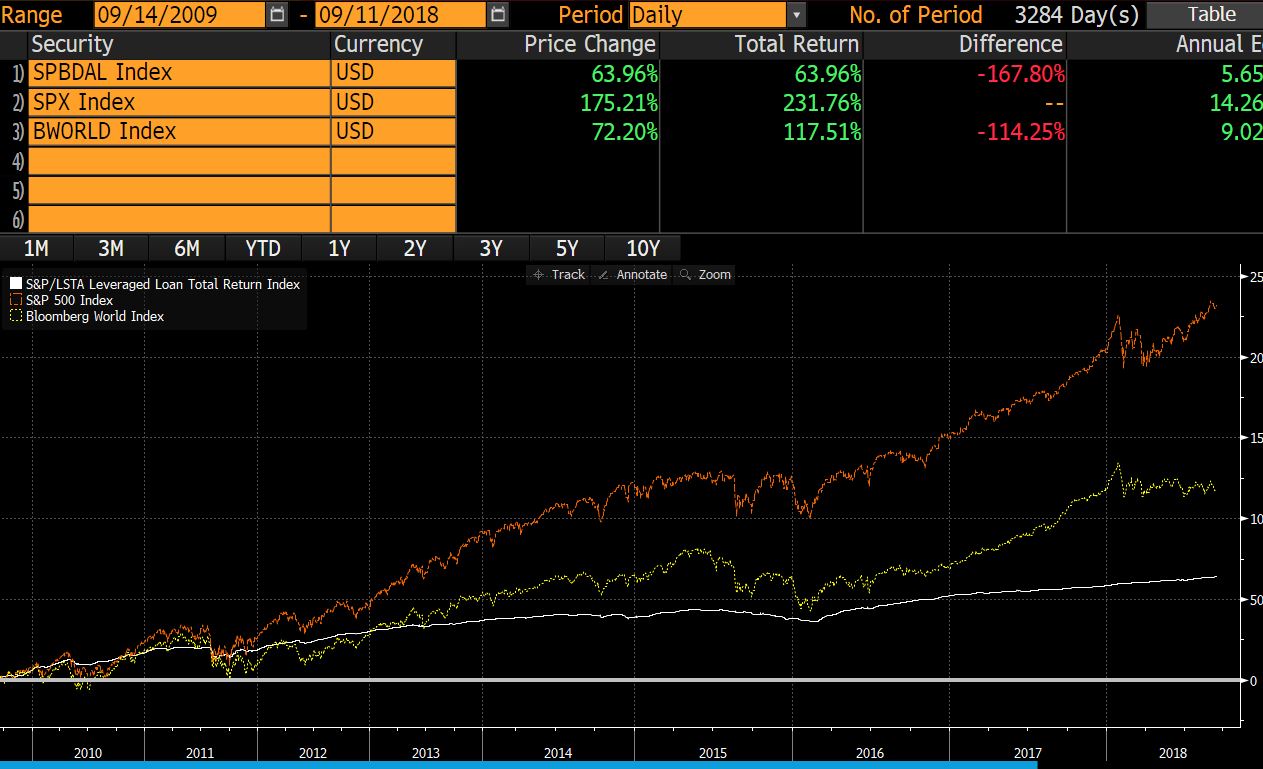 The monetary and financial system learned something else from Lehman. To hide any new case under the massive monetary laughing gas cloud.

We have seen other cases, but asset prices have continued to soar under the excess of monetary policies. Central banks have injected more than $20 trillion in the economies sending financial assets to all-time highs.

However, Japan, China or Europe have showed how that placebo effect stops working. The ECB and BOJ examples are clear. Massive liquidity stops working as an asset price inflation machine when it becomes part of the liquidity. The Bank of Japan started buying ETFs and in 2018 the market stopped rallying while the Topix fell 7%, the ECB prolongued its quantitative easing program and European stocks still fell 4%. Chinese stocks fell more than 10% despite massive liquidity pumping.

More than $9 trillion in negative-yield bonds can cause much more damage to the economy than all investment banks in 2008 combined. 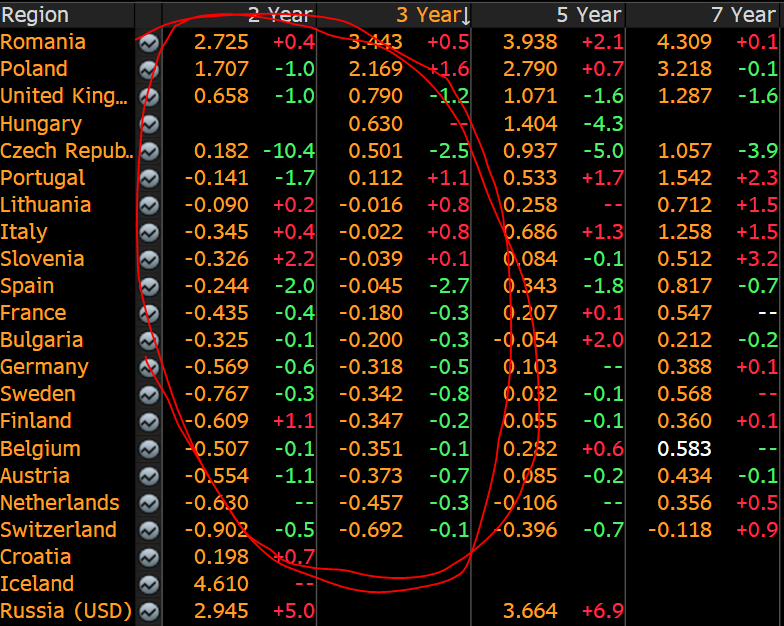 The world is well prepared to avoid repeating the 2008 crisis. The risk is that we are not prepared for the next one. Because global monetary and fiscal policies are aimed at increasing, not decreasing, risk taking and debt.

Monetary laughing gas has covered all asset classes with a fake blanket of security, disguising risk with ultra-low rates. We have solved a crisis of excess risk, debt and imbalances increasing debt, imbalances and taking more risk for lower returns.

We have learned a few things from Lehman, except that it seems that we want to replicate the same bubble with inflationary policies. The Lehman crisis was solved incentivising more Lehmans.

The next one will probably not be 2008-style crisis, it will likely be a Japanese stagnation solution, as the biggest risk today is in sovereign debt.

When the bubble bursts, governments and central banks will blame speculators and lack of regulation. And fuel the next bubble.